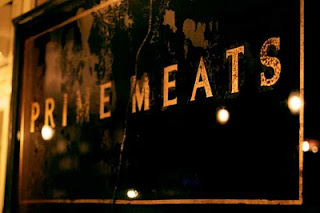 A recent visit to New York found me in Brooklyn with an old friend, Dave, who has a bustling business, One Girl Cookies, in the Boerum Hill neighborhood.  After spending some time with their new baby ( 1 yo) and Dave's  sweet wife Dawn, we wandered down to Carroll Gardens for dinner at Prime Meats, the latest offering from Frank and Frank that was recently awarded 2 stars from the New York Times.

We put our names on the list and went down to Butttermilk Channel for a drink, another bustling Brooklyn eatery relying on local products.

When our cell phone rang a bit over an hour later, we were ready to eat.  We were seated at a communal table on the bar side, and enjoyed chatting with our neighbors who quickly ingratiated themselves by sliding over an almost full bottle of red wine they they could not finish ( It must have been # 2 or 3 judging by their jocularity).

According to Frank and Frank, " Prime Meats is a farm to table restaurant created in the spirit of the inns and dining rooms found in New York at the turn of the century. Prime Meats is influenced by Germanic alpine cuisine and the menu pays tribute to the American artisan movement; featuring local and fresh ingredients, prepared simply and honestly."


We started our meal with a few appetizers- a traditional German pretzel made with malt flour, yeast lye and salt, served with mustard.  It had a nice crispy outside and soft interior, much fresher than the usual street fare. 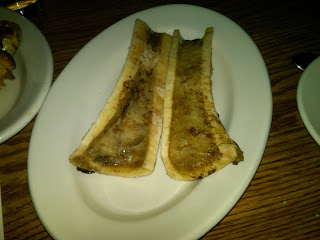 We contnued with roasted beef marrow, served with slices radish, gremolata ( a tangy conbo of lemon, capers and parsley),  a head of roasted garlic & toast. 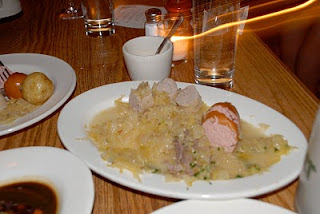 Sürkrüt Garnie was outstanding - their version is sausages & meat slow cooked in house lacto-fermented sauerkraut and includes knackwurst, bratwurst, pork belly, calves tongue & potatoes.Although sauerkraut is a traditionally German and Eastern European dish, the French annexation of Alsace and Lorraine following the Peace of Westphalia in 1648 brought this dish to the attention of French chefs and it has since been widely adopted in France. 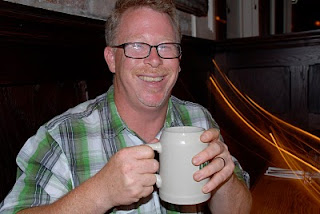 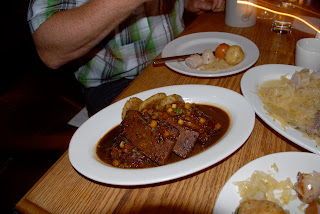 Sauerbraten is outstanding. They cook a Beef brisket that has been brined for 3 days in red wine, vinegar,apples, onions & spices (clove, cinnamon& juniper) then slow braised until fork tender. It is served
with pretzel  dumplings and braised red cabbage.
Posted by Epicuriousity at 1:44 PM

It all sounds so delicious, gonna have to take a ride and try it out myself.