I was at the South of the James Farmers Market a few weeks ago and was pleasantly surprised to find Padron peppers being sold by the nice folks at
Manakin Specialty Growers. My friend and neighbor Brandon Fox was the first to introduce me to these little treats- perfect for a pre-dinner cocktail hour. 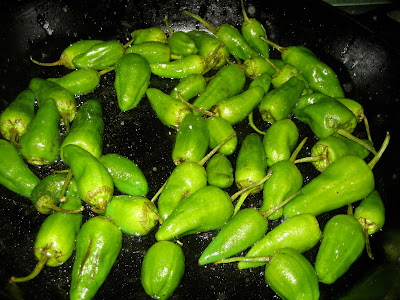 In the frying pan 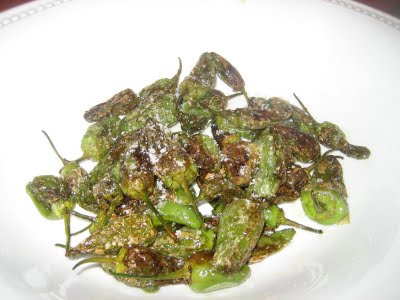 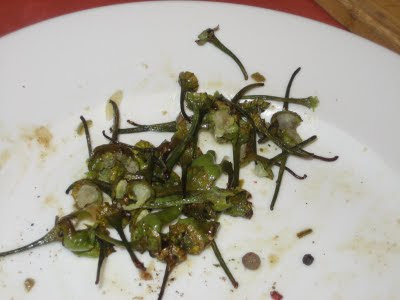 
Here is some additional history from Wikipedia:

The most famous produce of Padrón are its peppers (Spanish pimientos de Padrón), which are small green peppers from the Capsicum Annuum family. They are served fried with olive oil and coarse salt. Most taste sweet and mild, though some are particularly hot and spicy, which gives its character to the dish and is perfectly captured in the popular "Os pementos de Padrón, uns pican e outros non" (Galician for "Padrón peppers, some are hot and some are not"). The level of heat varies according to the capsaicin of each pepper. Although it's not always the case, the peppers grown towards August/September tend to contain more capsaicin than the ones of June/July.

About 15,000 kg of peppers are grown in Padrón each year (mostly in the valley of the parish of Herbón) between June and September. In 1979 the first Festa do Pemento de Padrón was organized in Herbón, a popular gastronomic event that has been held every year since, the first Sunday in August. The festa takes place in the carballeira of Herbón's Franciscan convent, since it was the Franciscan monks who brought the first pepper seeds from Mexico in the 16th century, which then were adapted to the soil, the Oceanic climate of the Valley and grown with special techniques.

Posted by Epicuriousity at 12:58 PM

Hi friend, peace...
Your blog very interesting.
If you willing visit my blog, and read my article at http://sosiologidakwah.blogspot.com
And... if you love books, read The Holy Qur'an please...

I had these at Mas Tapas in Cville. So excited to see I can make them myself. Did you use a wok or a cast iron skillet to fry 'em up?

just a cast iron skillet- heat the oil until its pretty hot.

They look so yummy! Is that all salt though? I bet mine would taste better if I put more salt on 'em.

Digital memory is something that I seem to be unable to ever have enough of. It's as if megabytes and gigabytes have become an inseparable part of my day to day existence. Ever since I bought a Micro SD Card for my DS flash card, I've been on permanent watch like a prison guard for large memory at low prices. I feel like I'm going insane.