A Dinner to Remember

On one of Richmond’s most dreary and dank evenings last week, a little restaurant on Broad Street became one of the warmest and intimate rooms I have ever experienced. Gary York, proprietor of Enoteca Sogno, presented Giuseppe Vaira and his Piedmonte wines.

Wise beyond his 24 years, Giuseppe told the story of how his father Aldo left the big city of Torino to return to the land of his ancestors near Barolo to start producing wine. And now he is following in the footsteps of his “padre”, newly graduated from university with a degree in winemaking. But he tells us that not everything can be learned in the classroom. Recently his father asked him how the vintification process was going. He reported back that all the levels and temperatures were on track. He went on to ask him, how does it sound? Did you listen to the grapes fermenting? There are not many who still believe in the alchemy of it all, the mix of science and soul.

The first wine we sampled was a Langhe Bianco, a surprising wine for this region. Giuseppe called it Barolo’s wife! It is a Riesling planted on the vineyard of Fossati, located at the borderline of the village of la Morra. Fossati is quite a steep vineyard, and growing the grapes at a higher altitude does a few things- it produces a wine with a wider mid-palate and it utilizes land that would be unsuitable for other grapes because of the cooler temperatures. And it’s unlike most Rieslings you have ever tasted, much drier and cleaner with subtle peach and apricot fruitiness but a long mineral finish. A nice start to the evening.

We were served an appetizer platter with our next wine- a nice selection of Fra Mani salami, a bra duro cheese from Piedmonte- it tasted more like sheep than cow to me; a rapini tart, and an onion sformato- a savory flan.

The next wine was a 2007 Langhe Rosso – a combination of 80% Dolcetto, 15% Barbera, and 5% Fresia, and Nebbiolo.
It’s a great drinking wine- hints of currant, a canopy of flavors, a bit spicy, nice body and smooth finish.


Our next wine was a Dolcetto d’Alba 2007- I learned that the Dolcetto grape is one that can be used as an eating grape and also to make wine- it has a deep purple color with low acidity and lots of tannin. The next wine was also a Dolcetto Coste & Fossati, 2007 –made with a blend of Dolcetto grapes from 2 vineyards- Coste has a SW orientation on a step slope and its afternoon line gives the grape more structure. The Fossati vineyard, with a SE orientation, gets morning light and is more delicate in its body and flavor. Combined together, they are a great pair. It was a nice complement to the Butternut Squash soup with fried sage on top. Earthy and delicious.

The next wine was a 2007 Nebbiolo delle Langhe- Giuseppe spoke of the wine in comparison to the famous Italian actor Marcello Mastroianni- it makes whatever it is served with a “princess.” It certainly was a great pairing with the mushroom risotto, cooked perfectly al dente with just enough cheese to enhance all of the flavors. Giuseppe joked that this was his “college wine” that he kept his roommates happy with throughout the year. It’s a great food wine. 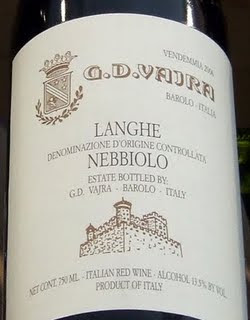 Our final course was a beef shank cooked in Barolo and served with its juices over creamy polenta. The 2003 Barolo was a real treat – even though it was a hot year, the relative lateness of the Nebbiolo harvest gives them the advantage of cooling down. It’s a great wine with food, fruity with surprising level of tannin given the weather.


The final wine of the evening was another surprise, Vajra Kye, made with Fresia grapes, a lesser known Piedmonte grape style, and the name is a play on the Italian Chi e’? what is it ?

Thanks to Gary York for bringing Giuseppe to town and for a great evening.
Posted by Epicuriousity at 12:46 PM