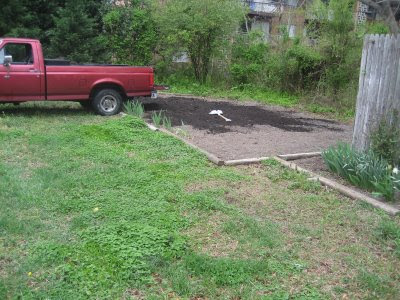 In the beginning- adding some organic matter to the freshly tilled plot ! 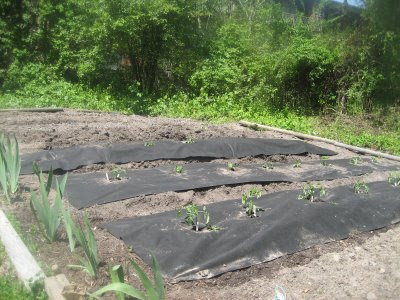 setting out the rows and experimenting with some landscaping material this year. GO AWAY WEEDS ! 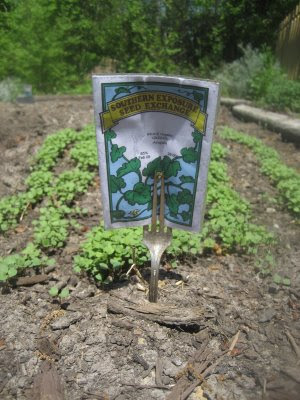 Susannah had the great idea to laminate the seed packets to label the rows- notice the old silver fork ! 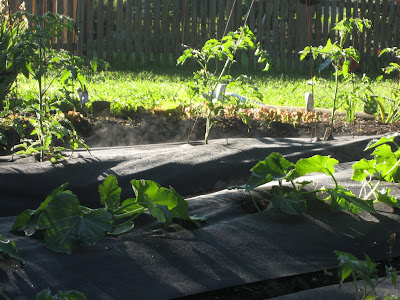 Things are starting to grow- notice the steam as I work the soil on a cool morning.
Posted by Epicuriousity at 11:23 PM 1 comment:

According to Food Democracy Now, Washington State University announced that it was pulling Michael Pollan’s best-selling book The Omnivore’s Dilemma from its required Common Reading Program for all incoming freshman due to pressure from corporate agribusiness.

This type of censorship cannot stand!
Click here to take a stand !
Posted by Epicuriousity at 9:16 PM 1 comment:

"We purchase refrigerators the way we fill them: out of necessity—to preserve the milk; to keep the greens from wilting. But from the right vantage point, an open fridge is the perfect staging grounds for a discussion of consumption. And if the aphorism holds true—if we really are what we eat—then refrigerators are like windows into our souls. It’s that sentiment that’s at the heart of Mark Menjivar’s inventive exploration of hunger, “You Are What You Eat,” for which he photographed the contents of strangers’ refrigerators. As you can see, whether it holds neatly ordered rows of labels-out condiments or zip-locked stacks of shot-and-gutted buck meat, there’s almost certainly a narrative to a fridge’s arrangement.


what's in your refrigerator ?
Posted by Epicuriousity at 10:36 PM 1 comment: 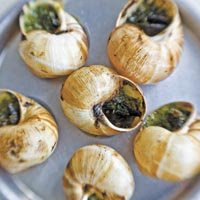 My latest review of La Cave is at this week's
Style Weekly.

When cheap comes at a price.
by John Haddad


One of my favorite phrases of the French language, comme ci, comme ça, literally means “like this, like that.” But in the everyday sense, it means something like so-so, or what my father-in-law calls “fair to middling.” That’s my perception of a new Carytown wine bar and café called La Cave.

La Cave is the latest venture of French transplant Carol Giraudeau, who ran Bella Arte in North Side until it closed last summer. She took over the Jet Set boutique space to start her bar and café, which opened two months ago. It’s difficult to classify the décor: Remnants of the former shop combine with awkward banquettes in the narrow space. The sign out on the sidewalk also reveals an uncertain tone: “Café” is erased but still visible, and “Bar” is the primary moniker.

My first visit was at lunch on a rainy weekday afternoon. The weather suggested soup, so my wife and I started with the French onion and potato and leek. The first soup was served in the usual fashion with croutons and melted cheese but had almost no flavor. I was surprised at the answer to my query about the type of stock — my server indicated that an onion base was used instead of the more usual beef or chicken stock. The potato and leek soup, however, nicely blended the elemental flavors with a creamy finish. Our sandwiches were disappointing because of the third-rate bread —without crust, crumb or complexity. There’s really no excuse for poor bread in Richmond anymore — there are some very good breads baked locally and some other par-baked options as well.

The one lunch highlight was a nice country pâté of liver, duck and veal with a side salad dressed in mustard vinaigrette. Chocolate mousse fell on the pudding side of the continuum, salvaged by homemade whipped cream and a hint of bittersweet chocolate.
When a friend and I inquired about a
wine list on a return trip for dinner, we were led to the bar and given a view of the 10 or so wines that would comprise the list if it were written down. I was surprised to see Citra, the mass-produced Abruzzi swill, as one of the house whites when there are so many other more interesting options available. Our tempranillo-syrah blend was palatable but not exceptional. With a name like La Cave (a reference to a wine cellar), I hope that the wine list becomes more of a priority. With Bin 22 and Can Can just a few blocks west, and River City Cellar’s Secco on the way, La Cave has some stiff neighborhood competition, not to mention the proliferation of wine bars across the city.

Appetizers at dinner were a pleasant surprise. The Caesar salad combined fresh greens, croutons, anchovies and a glorious garlic-studded dressing that pops in the mouth. The escargots were delicious — roasted in their shells with olive oil, garlic and parsley — and quite a bargain at $7.95.

Beef bourguignon left a little to be desired; the meat was a bit tough and a sour undertone distracted from the flavors. Its presentation mixed with rice was spot-on, though, and I wonder if another wine would improve the dish.

We opted for a cheese course instead of cheesecake or mousse for dessert. I hope La Cave adds to its repertoire with a fruit tart as berries become locally available, or perhaps a crème caramel.

La Cave’s most redeeming quality is its price. Nothing on the menu costs more than $10, which makes for an affordable experience. But it’s difficult to keep folks coming back on price alone. In order to survive, La Cave needs to bolster its wine list and upgrade its bread. As the proverb says, “With bread and wine you can walk your road.” Right now, La Cave needs to start working on both.

the diagram below makes me feel very organized- but in reality, the garden has been a bit more unruly and less calculated in its actual cultivation and planning. 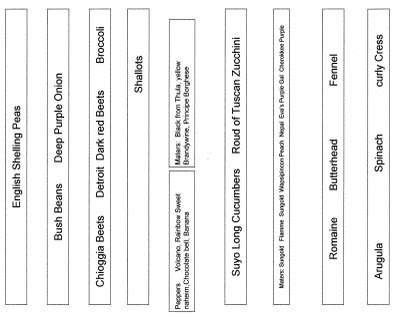 Posted by Epicuriousity at 10:40 PM No comments:

Mike and Nicki were the hosts of Big Night 6- a May Day luau. No self-respecting luau would be caught without leis, or without a pig. Now mind you, with the country scared about the impending swine flu epidemic that followed us around like white on rice, some party-goers were a bit leary of our special guest, Pete the Pig. 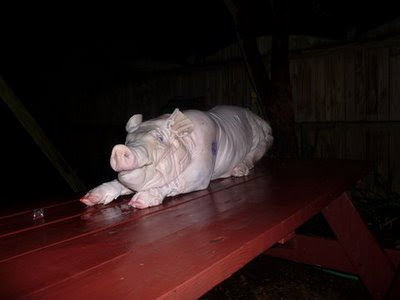 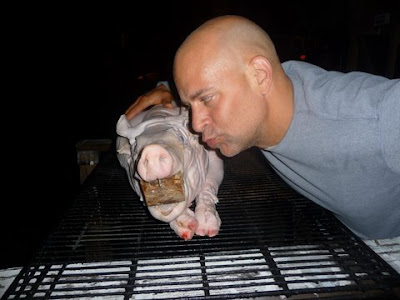 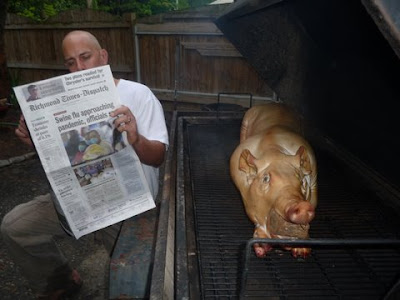 Reading about the Swine Flu while Pete starts to cook 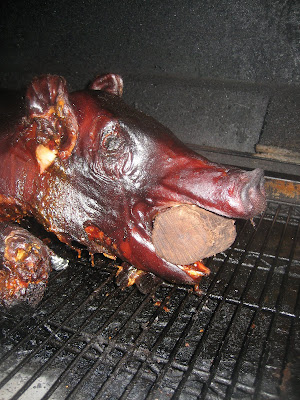 Pete is just about done ! 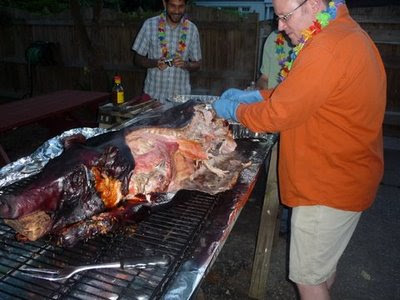 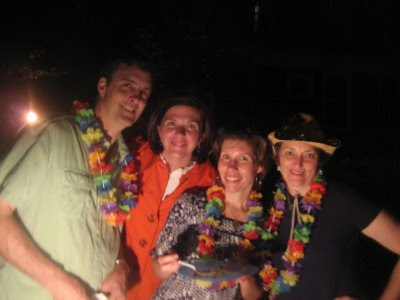 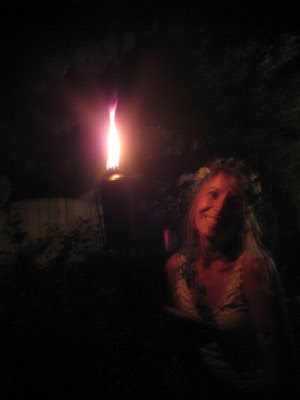