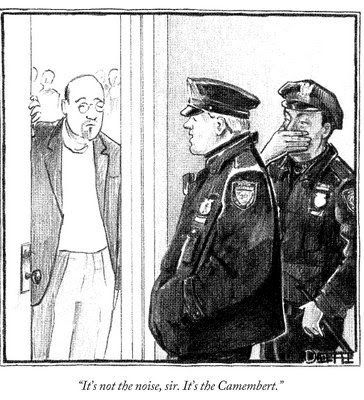 Last night I went to a friend's 40th Birthday Party- i expected a raucously good time, but what surprised and delighted me to no end was a cheese plate on the buffet. A friend of the host had visited from France, and carried along a stash of some raw milk cheeses.

This is a raw milk cheeses that comes from the farms in the Rhone-Alpes area of France. The French call this caille doux. Affinage (maturing) is a least two weeks.

One of the oldest of French cheeses. Its origins trace back to the 12th century under the name of d'Angelot. It was only in the 17th century that it took its name from the village where it was made, namely, Pont L'Eveque. The village is situated between Lisieux and Granville in Normandie. This cheese obtained the AOC rating in 1976.

Well known throughout the world, Camembert is the cheese the most often copied, but connoisseurs know that the true Camembert comes from only five departments in Normandie. It is produced from raw milk and ladled into cheese vats.

This was was an unnamed wonder from the local fromagerie- covered with a light fuzz of mold and a tangy undertone.


*** cheese information courtesy of www.fromage.com
Posted by Epicuriousity at 1:43 PM

Oh. Yum. You should try some of Josh's raw milk cheeses. He made a taleggio this year that was delicious. Here in PA you can buy raw milk.

Hey, I've started an organic gardening blog for an ongoing sustainable kitchen garden I'm currently planting. I'm new to blogging and could use some help/ exposure. Sorry for doing this in your post but I didn't see a contact link.

I'd love to link to your page, do I have to ask?

This sounds amazing- what a delightful birthday gift- that would be my favorite present of all. -e

Splendidly done is well-advised b wealthier than comfortably said.

Splendidly done is well-advised b wealthier than spectacularly said.

A human beings who dares to barrens anyone hour of age has not discovered the value of life.