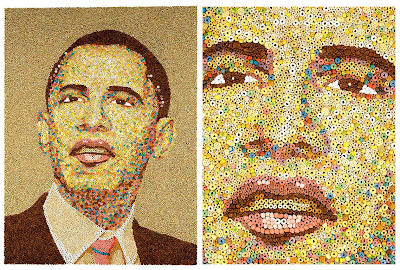 Thanks to Cereal Art and Amazon Blog Al Dente for this post :

In “Breakfast of Champion” Thomas and Alexiev are commenting on the iconization and consumerization of the President of the United States. The piece appropriates the religious imagery of Byzantine mosaics to create a sugar cereal image of President Obama. Does the election of Barack Obama symbolize a victory of substance over cynicism or of packaging over product? The mosaic proposes the question: “Is Barack Obama a modern messiah in the world of politics or marketing?
Perhaps he is both. Only time will tell. Underneath the glossy surface of the piece is the artists’ attempt to understand how to critique and question something they too are seduced by. (An idea we were trying to get at) - The sugary sweet mosaic, made of thousands of cereal bits, depicts idea of what a healthily balanced breakfast (democracy) might look like when considering the role that marketing plays in myth building around corporate and political brands.

Hank Willis Thomas' work deals with complex issues of race, identity, class and history in the age of consumerism. He investigates how commercial marketing and branding is geared toward specific racial groups and raises questions about visual culture, the power of logos, and media representation of African Americans. Ryan Alexiev explores the history and social implications of consumerism through his art. Alexiev creatively uses different forms of media to illustrate his ideas.

Hank Willis Thomas was raised in New York City. He received a B.F.A in Photography and Africana Studies from New York University's Tisch School of the Arts in 1998. He received an M.F.A in photography and an M.A in Visual Criticism at the California College of the Arts in 2004. His work has been widely published and exhibited internationally, most recently in 30 Americans at The Rubell Collection in Miami, an Aperture publication and his second one person exhibition at The Jack Shaiman Gallery in New York.

Ryan Alexiev was born in Los Angeles and raised in Alaska. He received a B.A. in History from the University of California at Berkeley in 1994 and an M.F.A from the California College of the Arts in 2007. He has exhibited at The Moore Space in Miami, The Wadsworth Atheneum, the Nathan Cummings Foundation and has just completed a solo exhibition at the Mission 17 gallery in San Francisco.

Thomas and Alexiev collaborate frequently, and were recently commissioned along with the ©ause Collective to create a video installation for the Oakland International Airport which was also selected for inclusion into the 2008 Sundance Film Festival.
Posted by Epicuriousity at 1:47 PM

Hello everyone! Who knows where to upload the film Avatar?
I even bought the film Avatar for a SMS to http://rsskino.ru/kinofilm/avatar.html , the link was, but download fails, the system will boot quite strange cocoa something.
Men, advise where to normal as quickly download film avatar?

I sell a boat-program which will help you to outwit auction and to win, initially the boat was created for the Scandinavian auction http://internet-aukcion.ru/ but now the program can work with similar auctions: gagen ru, vezetmne ru and with ten.
The program-boat stakes for you, i.e. for this purpose it is not necessary to sit constantly at the monitor. The boat can set time when it is necessary to stake, thus you as much as possible will lower expenses for rates, and as much as possible increase the chances of a victory.

To all clients free updating and support.

The script is written in php5

optimized to work in a continuous loop
check-activation-filling-spam check ..

Updates and support free of charge.

For the first 10 buyers price 70 wmz (your feedback on the software).

Flooding in the subject no! Write to feedback after the purchase.