Under the trance of Mario

I love what he does with the simplest of ingredients; many of my trips to New York have included a Mario Batali restaurant, Over the years, I have had the pleasure of dining at Po, Lupa, Babbo, Esca, and Otto. Last weekend found me in New York visting one of my best friends from London, who had hopped the pond for a long weekend of shopping. The dollar is really that weak against the pound.

After a long day walking the chilly streets of New York and battling the hordes at Rockefeller Center, we welcomed a few hours to relax. Mario Battali’s OTTO is not exactly an anecdote to the over stimulated. First of all, the restaurant is heaving with people, When we arried at 7, there was a wait of nearly 2 hours to contend with. Luckily for us, we found a cozy corner to tuck into, and the negronis were flowing. When we finally sat down (when PIACENZA finally came up on the arrival board- patrons are give n pseudo train tickets with different Italian cites as destinations- when your city comes up on the board, your table is ready.) We munched on fresh bread and olives, roasted peppers, and caponata as a prelude to a few of the most lovely pizzas one can imagine:

One was a simple mushroom and taleggio pie, the other with tomato, mozzarella, and arugula.

After spending a snowy Sunday wandering through Soho and a hard-hittingg Kara Walker show at the Whitney, I was ready for a drink by 4 in the afternoon. There are few lovelier places to sneak into then the new gastro pub in the West Village, The Spotted Pig. After a mulled wine to take the edge off I had a few locally brewed 6 Point Cask conditioned ales. With less fizz, and less chill, they are a great drink for a snowy afternoon. I spent the afternoon with my good friend Dave, a former baker in Richmond and now owner of Brooklyn’s One Girl Cookies. After some friends arrived we had a great meal under the watchful eye of April Bloomfield, former chef at London’s River Cafe, Kensington Place, Bibendum as well as the Bay Area’s Chez Panisse 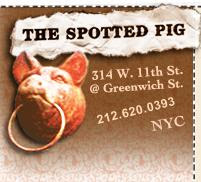 After a few appetizers of Deviled Eggs and Roll Mops (pickled herring) Dave and I split Pan Fried Calf’s Liver with Crispy and Panfried Skate with Chicory & Potatoes. The liver was rich and earthy and the texture a perfect complement to the cispy pancetta. The skate was moist and tasty and sat on a bed of sauteed chicory, a slightly bitter yin to the skate's sweet yang.

We finished the evening with take-out cupcakes from the infamous Magnolia Bakery- Dave gave us a primer on the intricacies of cupcake baking,from how butter and shortening produce a different “crumb factor.” I think Magnolia Bakery is a bit overrated- the cupcakes all taste the same. I like the cupcakes from One Girl Cookies
Posted by Epicuriousity at 12:04 AM

One Girl cupcakes are better than Magnolia's? Get me some of those! I like that you got Piacenza -- that's where my mom's family is from! What a great weekend ...