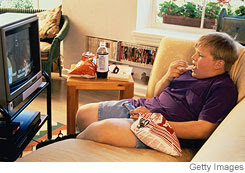 A recent study published by the medical journal, Appetite, suggests that food advertising on TV has a direct impact on both the quantity and types of food that kids eat. The study compared how much kids ate after watching adverts before a video. The first session featured ads for toys, and the second session, fielded 2 weeks later, featured food ads. After each session, the kids were allowed to graze a snack table that included healthy snacks as well as chips and candy. In the group of 9-11 year old kids, "they ate from 84% to 134% more calories after being exposed to food ads compared with their snack intake after watching toy advertising."

The fact that a visual stimulus would prompt us to eat even if we're not hungry makes sense from an evolutionary standpoint, says David A. Levitsky, "From an evolutionary standpoint, if you see it you better eat it because you don't know when it's not going to be there anymore," says Dr. Levitsky. "What the food companies have learned very well is how to take advantage of that process and get us to eat more by showing us food."
For the complete bowl of salsa, > dip here
Posted by Epicuriousity at 10:26 AM

Turn off the TV.