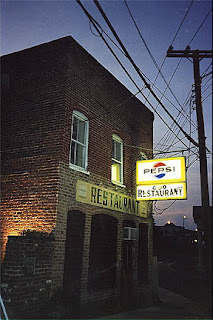 Theater- Jeff Tweedy, the front man from Wilco,
was playing a solo acoustic show. We were able to sneak out of Richmond early enough to have a nice dinner. As we pondered the many choices within walking distance on the Downtown Mall, we opted for an old favorite, the warm and cozy confines of the C&O Restaurant's basement bistro.

Greeted outside by flickering lanterns, and inside by a warm fire, our decision was decidely a good one on a cold and blustery night. After a few drinks from the bar- local Starr Hill brew and a few Makers Marks, a basket of warm bread arrived at the table and was gobbled up.

We sampled a variety of dishes including a Pear & Leek soup, Pumpkin gnocchi, sweetbread croquettes, a venison steak, and Steak Chinoise with fresh ginger, Tamari, and scallion cream sauce. The latter was served with mashed potatoes and green beans, simple fare but just what the night called for. A few bottles of Shiraz rounded out our pre-concert meal. I hadn't been to the C&O in over 5 years, but it has certainly held its ground in a competitive restaurant scene in Charlottesville. And few can boast of the same warm bar and intimate atmosphere. 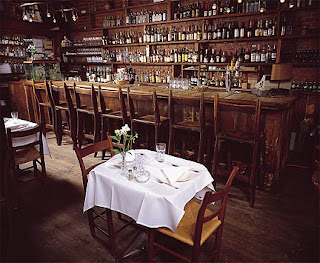 Posted by Epicuriousity at 9:32 PM

Josh and I had one of our most memorable, romantic meals there a dozen years ago, just as we were falling in love. I had the most amazing white chocolate cheesecake, and I'm sure he can tell you what he ate.

While our life is totally unrecognizable from what it was then, I'm glad to know C&O is still the same.

Nice shot of the bistro interior! It's a restaurant with such a remarkable interior that it would make a great dining experience even if the food were not good, which it is. I still have never dined in the upstairs, though....

Anonymous said...
This comment has been removed by a blog administrator.
11:03 PM