It was tucked away on a sideboard, and I’m so glad I didn’t miss it. It’s a traditional soup from Northern Spain and of course is chock full of pork delicacies. For more information and the actual recipe, check out the link on Brandon Eats.

Soup for a Cold


Number 2 and 3: The Belmont Butchery

They contributed to two of my top 10 food moments of this holiday season. Prime Beef Tenderloin for Christmas dinner so tender you could cut it with a fork. Hand-made cotecchino sausage for New Year’s Eve – Traditional to Northern Italy and Emilia-Romagna, Cotecchino with lentils is a crucial part of the Italian New Year's Eve's meal- some say that the sliced sausage symbolize the coins that may come to you in a prosperous new year. 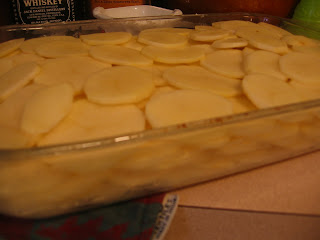 Lovely russet potatoes sliced thinly with my mandoline and carefully layered one atop another. A bath of heavy cream and garlic and sea salt and an hour in the oven yields one of the tastiest way to eat a potato.

Number 7- A large flute of Champagne from Bin 22 after the movie to toast 6 years of marriage.

Number 8 – A holiday party at the home of one of Richmond’s premiere catering stars- it lived up to the hype- those boys can throw a party. It just goes to show that practice does make perfect.

Number 9- Homemade pasta on New Year’s Eve- only the 2nd time in 5 years that the Pasta maker has seen daylight- it was quite something to be working side by side with my two-year-old who put his Play-dough through a similar kneading exercise. 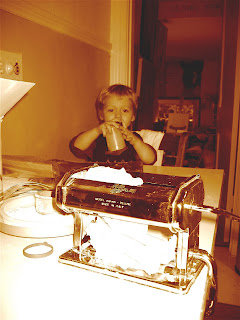 Number 10 – 12 types of homemade cookies and a peppermint trifle from my lovely wife Susannah.
Posted by Epicuriousity at 11:34 PM

it used to be that one of my highlights was pasta gorgonzola in the company of my best friends at Christmas...

It looks like you ate well this season, and Susannah outdid herself with the holiday goodies. I stopped at 7 this year, but my homemade Virginia Peanut Brittle was amazing, as well as the best Pecan Pie ever.

Miss you something awful.

Ahhh, everyone seems to think they sampled the Caldo Gallego I wrote about on my blog BUT, in fact, you had an even rarer treat--patas y callos, more commonly know as pig's feet and tripe. And it's much more delicious when you don't know the ingredients until afterwards.