A Tale of Two Festivals 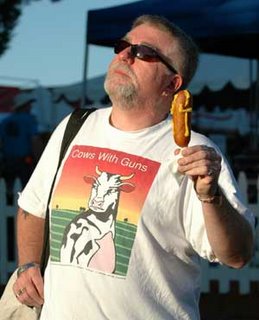 Two recent Richmond events offered a glaring glimpse at just how wide a range of food options are available to Johnny Festival Public. The State Fair of Virginia offered up its usual range of greasy specials like corndogs and deep fried oreos, gyros and spaghetti and meatballs on a stick. The most interesting food at the Fair is unfortunately only for the few select judges who weigh in on the best cakes, pies and cobblers that the state has to offer; Johnny Public must be content to gaze longingly at the winners through pane glass and go back to the standard fair fare on the midway. Most of it leaves much to be desired. Are corn dogs and gyros the best that we can offer as a reflection of our state's culinary pride?


Last weekend's National Folk Festival proves otherwise.
Amidst some of the usual festival fare like funnel cakes and burgers, visitors were treated to a wide range of ethnic delights that included Indian fare from India K Raja( great curry and samosas), African food from Ma Musu's (incredible spicy greens and grilled chicken), Fried fish and shrimp from Jackson Ward's Croaker's Spot, tasty veggie spring rolls and dumplings from Ginger in Carytown and the list goes on. All washed down with an assortment of cold and warm beverages. Bravo to the Folk Festival organizers who wouldn't settle for normal festival fare and included the rich diversity that this town offers up every day.
Posted by Epicuriousity at 12:01 AM 3 comments: