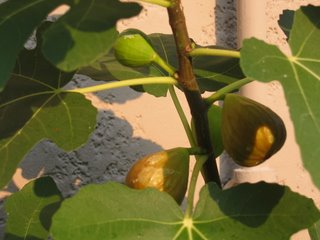 My fig tree, just 4 years old, loves its home next to my stucco house where the summer sun warms it doubly, even when night falls. I have had two crops this summer with the new batch ripening as I write. I can hardly get them from the back yard to the kitchen before they disappear.

In case you were wondering, here are some historical and scientific facts from our friends at Wikipedia interspersed with my musings. Fig Trees are a species from the genus Ficus, which includes about 800 species of woody trees, shrubs, and vines.
There is circumstantial evidence that figs were among the first cultivated crop, based on preserved specimens in Jericho.The figs were grown some 11,400 years ago, and because they were of a mutation which could not reproduce normally, it is proposed that they may have been planted and cultivated intentionally, one thousand years before the next crops domesticated (wheat and rye).

It has been suggested that the Tree of Knowledge from the Garden of Eden was a fig tree, famous for its large leaves that came in handy for Adam and Eve to cover themselves in the first recorded moment of shame. It is interesting that they are purported to have aphrodisiac qualities and the fruit when split open has certain similarities to a woman’s sex. Is it not ironic that a tree with the leaves used to cover Adam and Eve from self-conscious shame in the Garden of Eden yields fruit with such lovely qualities?
Posted by Epicuriousity at 10:34 PM

My 4 and 6 year old daughters often remark that the fig interior is reminiscent of the interior of the small intestine, specifically, the villi. To me, the fig is best enjoyed without dwelling upon the appearance of its interior.

How can you tell if they're ripe?

The ripeness clues, I think, depends on the variety. My figs are brown turkey and become a light purpley brown (black mission get darker). They come off with just a gentle pull and usually the birds have pecked at them a bit!

Also, Horticulture Magazine had a great article on Apartment Figs recently. The article said that the first crop (grown on the new young growth) tends to have the strongest flavor but has problems ripening. The second crop grows on the even younger wood later in the season. They mature faster and are incredibly sweet and juicy. Next year, I'm pruning hard in the early spring so as to have more of both kinds of harvest!